Join my newsletter list to be the first to hear our latest news! Learn More
Home / Believe / Still in the Saga… and a Story of How God Answered a Prayer

It’s funny how God brings you through layers of new revelations if you stick with Him through a difficulty. You get a glimpse of the beauty in the pain of a transformation at the potter’s wheel. This last two weeks has been a flurry of motion – doing the next thing – putting fires out – refocusing on family and dropping all other distractions. That’s what you do in a health crisis… you double down and lick wounds.

When the quiet comes, even in the motion… always the constant sound of the washer and dryer rumbling, the little ones being little, the dishes clinking in the sink… you hear God speaking words of change to your heart.

It’s in hardship that God does housecleaning.

Somehow I know this, too, will be used for our good… even if I can’t see past the doctor bills and laundry piles.

So we had this red minivan. Ugly as sin. Had a sliding door that was automatic. We thought we had graduated into the adult world with our two kids and minivan. We certainly had – and it came with all the payments adults pay. It was sinking us into a financial hole.

After a while, we both knew the van had to go. I wanted to stay home with the kids and homeschool them. We had to get rid of some overhead or it wasn’t going to happen.

We prayed and agreed that God wanted to bless us and that if He wanted to bless us, He would give us a blessing that did not put us further into debt. We prayed that if God wanted us to sell the car, we would know it was from Him if we got an offer that was AT LEAST what we owed on the vehicle so we wouldn’t be in the hole.

Then we started looking for a buyer for the van. The first lot offered us 100$ less than what we owed. My husband begged me to take the deal. I refused. “Remember our prayer?” I asked him. We can’t just pray one thing and do something else. Reluctantly, he agreed to try again.

The next dealer offered us four THOUSAND dollars less than what we owed (we still owed 10K on it). My husband was devastated. I was so disappointed. Neither of us could understand why God wouldn’t jump on the chance to bless us since we were obviously waiting on Him, believing he would… and we were wanting to get OUT of debt and downsize the car.

The third dealership we tried was Carmax. They offered us 6 THOUSAND dollars less than what we owed. We went home in despair.

Not long after the Carmax episode, we were driving down the freeway with our babies in their car seats (both the older two kids were young enough to be in boosters and car seats at this time)… and the SLIDING DOORS started opening while we were going over 60 miles an hour.

We were stuck in a vehicle that was not only bankrupting us, but now it was DANGEROUS to our children.

Thankfully, the van only popped open like that while we were driving about three times total… before God sent the rain. It rained for days and weeks, it seemed. Tropical Storm Allison flooded almost the entire city of Houston. People were air-boated out of our neighborhood. Kevin had to wade in water up to his chest to get to our house to save our cat. We had escaped the night of the bayou flooding because his father had drove over to get us – and water was lapping at his HOOD on his truck by the time we were finally turning out on to the main road. We were so afraid it would stall. Inside our one-story home, we had over two feet of water damage… pretty much everything lost.

Guess what? The VAN had water up to the DASH. It was totaled. The insurance check was for FIVE THOUSAND dollars over what we owed for it.

God had come through in a big way. Even though it wasn’t the way we would have ever asked Him to do it.

The point to this story? He knows better than I. I know He loves us. I know that if I just keep my eyes on Him, we’re going to be OK. It may take a few months to get healed – and a few more for the cats. Who knows? Somehow He’ll work it out. 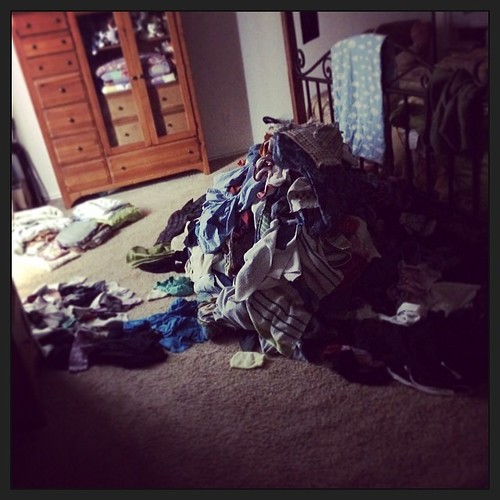 Do you have a story of when God answered a prayer in a different way than you imagined? When He blessed you through a difficult time? I’d love to hear it. It will give me some encouragement when I wake up at 2AM to rotate the laundry and can’t fall back asleep right away.

Moody Salanova lettuce, showing off. Can your groc

This lil’ cutie and I are painting faces at the

My friend @satxfam has this hanging in her house.

🐮… got milk? This little Texan is about to